Dr. James MacConnell, a former Superintendent of Beaverton Schools, is considered the father of educational facility planning. When he introduced a new concept in U.S. education: consolidation of small rural schools into one central hub, his vision of an innovative school was built in Beaverton in 1935 and served this area for well over 60 years.

In 2015, MacConnell’s vision was rejuvenated when the building he designed transitioned into Beaverton Activity Center in a grand opening celebrated by over 800
people. A year later, our city nominated BAC for the Michigan Municipal League’s Community Excellence Award in the category “Strength in Structure.” Against formidable competition from much bigger cities our success story earned the league members’ votes to win the coveted cup!

Now 87 years old, there’s new strength in this old structure because it’s so much more than a building now – it’s an organization focused on the future.

Beaverton begins a school consolidation program, one of the first in the nation. To transport students from the surrounding area, Federal funds are used to purchase a fleet of Chevrolet open-air buses.

Beaverton citizens pass a bond issue by a vote of 130-4 to build a new high school. A Federal PWA Grant supplemented the bond issue funds.

New Superintendent James D. MacConnell helped design the building known as Beaverton Activity Center. A new fleet of enclosed school buses is purchased through a federal grant. The new school opened in the fall of 1936. Historic news reels by U S Government document the opening and include footage of students and the new bus fleet.

The gymnasium addition with a stage is built, greatly expanding the size and use of the building.

Grades 3-4 move to the original 1936 building after Junior High is moved to the high school building built in 1965.

This was the last year of Beaverton Rural Schools use of the building for high school, junior high, and elementary school classrooms.

The west end of the building is re-opened as a Pre-School run by Mid Michigan Community Action Agency.

Adult Ed Programs are housed in the building.

A group of six citizens forms an exploratory organization to pursue the restoration and development of a new Community Center in the 1936 building.  In October, a number of volunteers host a 75th Birthday party for the building, as a promotion for awareness of the plans to renovate.

In October the newly renovated Beaverton Activity Center opens its doors for a Grand Opening attended by nearly 1,000 local citizens and special guests.

A six-person team begins meeting and discussing plans to explore raising funds to renovate the original 1936 School Building on the corner of Tonkin and M-18 for use as a Community Center.

Forty local citizens gather at the building to hear updates on the project. Many volunteers are on various exploratory committees.

BAC Board members and volunteers sponsor a 75th Birthday Open House celebrating the 1936 opening of the building. Tours are offered and information about the project is shared.

11 Fall classes and workshops for all ages debut. In the coming months, class offerings grow and continue to be held until the renovation of the building begins in 2014.

June
2013
Board of Directors Establishment

The first formal establishment of the BAC Board of Directors.

Talks with USDA to initiate a project grant application.

BAC announces that the community not only met but exceeded STEP UP CAMPAIGN fundraising goals.

In addition, Larry Richardson, of Pottery at the Vinery in Coleman, completes the creation of ceramic tiles that recognize local donations to the BAC project. Larry begins installing the tiles in the front lobby of BAC.

Grand Opening of remodeled BAC is held, with over 1,000 visitors attending.

BAC is named the MICHIGAN MUNICIPAL LEAGUE 2016 award winner for best Community Project. The MML Trophy is awarded to BAC at the Annual MML Convention at THE GRAND HOTEL at Mackinac Island.

Beaverton Votes to Build School in 1935

In an overwhelming vote of confidence in its school board and superintendent, electors of the Beaverton school district yesterday carried the proposed $36,000 bond issue for a new school building by a vote of 130 to 4.

Following the tabulation of votes last night school officials issued a statement thanking the Beaverton district electors for the expression of confidence indicated by the balloting. “While it is yet impossible to determine just when work on the new building will begin,” said Superintendent James MacConnell, “it may be within the next 60 days.”­ The $36,000 bond issue will represent Beaverton’s 55 per cent of the $65,000 called for in the plans for the new school building.­ The government PWA contribution totals $29,454.

Prior to the election, Board members pointed out that the new building is an absolute necessity and that the school district was actually making a saving of $30,000 if it accepted the government grant. At the present time classes are being held in five different buildings, four of them being temporary structures.

Plans for the new school building have been drawn by Warren S. Holmes, Lansing architect, who has worked in conjunction with the board in securing the PWA grant.

JAMES MACCONNELL, Superintendent of the Beaverton Rural Agricultural high school, begins his eighth year as head of that institution August 31, when school opens. Mr. MacConnell has been instrumental in making this one of the outstanding Smith-Hughes schools in the state. His Future Farmers’ organization has repeatedly carried away state honors. College officials in Smith-Hughes work say: “Jim is our No. 1 man.”

The Beaverton activity Center building was the first School Building that James D.MacConnell ever designed.­http://www.cefpi.org/i4a/pages/index.cfm?pageid=4280­ Dr. MacConnell is considered The Father of educational facility planning and was instrumental in nurturing this profession from its infancy to its significant stature in education today. Dr. MacConnell is best remembered as the director of Stanford University’s School Planning Laboratory, which he founded in 1951. The laboratory was the first center of applied and fundamental research on integrating school construction with child development, curriculum and instructional methods. The internationally renowned educator was CEFPI’s 1979 Planner of the Year and received the Distinguished Service Award in Educational Administration from the American Association of School Administrators in 1981.

Created in 1991 to honor the late Dr. MacConnell for his significant contributions to educational facility planning and the Council, CEFPI considers this to be its most prestigious award.

The James D. MacConnell Award recognizes a comprehensive planning process that results in educational facilities that serve the community, enhance the educational program, and meet multiple goals. Identified as one of the industry’s most prestigious awards, a “MacConnell project” exemplifies the Council’s belief that great schools begin with communication and planning. School facilities recognized in this award program might embody great architecture, but their successful components and characteristics were founded on an interactive process that engaged multiple stakeholders to create an educational environment that holds purpose and distinction within a community.

Jury members will evaluate the project materials in the following areas:

INNOVATIVE PROCESS: The overall quality of the planning process

COMMUNITY ENGAGEMENT: The degree of community involvement in the planning process

INNOVATIVE PROGRAMMING: The quality of the educational specifications/program of requirements resulting from the influence of the planning process

INNOVATIVE PLANNING: The uniqueness of the educational facility solution

SUPPORT OF LEARNING: The quality of the design response in fulfilling the needs of the educational curriculum

BALANCE OF NEEDS: Evidence that the planning process achieved multiple goals of the district & community

FUNCTIONAL ADAPTABILITY: The flexibility and adaptability of the design response

CREATIVE SITE DEVELOPMENT: Creativity in the site development in responding to the space program and educational specifications

OVERALL IMPRESSION: The overall impression that the project as a whole is a product of a comprehensive planning process

The jury will review all applications that have been assessed as complete with all materials included in the submission. The jury will select no more than 5 projects as “finalists” to further review and evaluate. Once selected as a “finalist” submitting firms may be asked for additional photographs and images. Finalists will also be asked to participate in an electronic interview and to create a video presentation for CEFPI use.­­http://www.cefpi.org/i4a/pages/index.cfm?pageid=4280 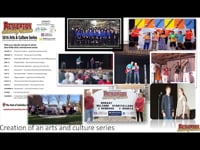